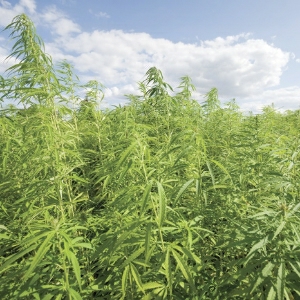 Hemp is back in Wisconsin! Low milk and grain prices and a struggling farm economy has left farmers searching for alternate avenues to achieve farm profitability. A combination of state legislation passed in 2017 and the removal of industrial hemp from the Controlled Substances Act on a federal level paved the way for farmers to legally grow and process industrial hemp in the state again. Though biologically hemp and marijuana are the same species, Cannabis sativa, hemp has negligible levels of tetrahydrocannabinol or THC, the psychoactive component in marijuana. Historically hemp was grown for fiber, and recently for seed that is used in a range of products for human and animal consumption. Currently the highest value product derived from hemp is cannabidiol, more commonly known as CBD oil. Scientific study of its potential benefits has been minimal in the U.S. due to the legal status of the crop, however it is the basis of one FDA-approved drug to treat epilepsy. There is wide interest in its possible health benefits and efficacy at treating a range of symptoms.

While we are in the very early stages of the new hemp industry, Wisconsin has a long history with the crop. It was first produced in the state on nine acres in 1908 as an experiment led by the Agronomy Department of the Wisconsin Experiment Station in cooperation with the Office of Fiber Investigations of the USDA. By 1917 Wisconsin was the second largest hemp producing state both in terms of acreage and fiber yielded. As a war crop, the fiber was mainly used to sew shoes worn by American soldiers and for cordage in ship building. From the earliest years of production, it was recognized that community cooperation was critical to making the crop successful. Machinery for handling hemp was expensive as were processing mills. The Rock River Hemp Grower’s Association formed in the first few years of the industry. In 1917, the statewide Wisconsin Hemp Order organized in Ripon to promote the general welfare of the hemp industry in the state, with both farmers and hemp mill operators as members.

Even as there are many reasons to be cautiously optimistic about the re-emerging hemp industry, many businesses and individuals from outside Wisconsin are scrambling for a foothold as it takes shape. A number of entities from Canada and western states, like Colorado and Oregon, with more established hemp industries are building a presence here, seeking farmers to grow for them. Informational meetings about hemp are often attended by bankers and investors as they too want to benefit from its profitability. There is concern that while hemp may grow here again, much of the value will be extracted by outsiders, or those not directly involved in the production and processing of hemp products. Thankfully, groups are organizing to keep that value closer to home!

Incorporated in early 2019, the South Central Wisconsin Hemp Cooperative is motivated to overcome some of the same challenges that catalyzed the formation of the early associations. It is a producer-led effort to carve out a viable place in the market for small-scale organic farmers aiming to grow high-quality CBD hemp. Sadly all prior local production knowledge is gone from Wisconsin’s hemp peak. The cooperative is gathering the information they can for their members; organizing a seed order for their first growing season; developing relationships with local processors; and attending meetings to keep abreast of industry developments. With support from UWCC they have developed bylaws and are currently examining business feasibility with support from the Wisconsin Farmers Union. Though spring is just upon us and there are still many unknowns, the South Central Wisconsin Hemp Cooperative is laying important groundwork to increase the value returned to farmers in this new hemp era for Wisconsin.

University of Wisconsin Center for Cooperatives engages in research, education, and outreach about cooperative issues across multiple business and social sectors.